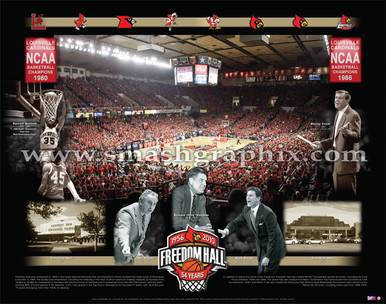 Freedom Hall was completed in 1956 in the newly opened Kentucky Fair and Exposition Center located five miles south of Downtown Louisville. In 1984, the facility was refurbished, including the lowering of the floor to allow maximum seating capacity to increase from 16,664 to 18,865 for basketball.

It has been the full-time home of Cardinal men’s basketball since the 1957/58 season, with the team winning 83% of home games in 50 seasons. U of L has ranked in the Top Five in attendance for the past 27 years, with 16 of the past 19 years averaging more than 100% of capacity. In addition to being the home of the Cardinals, Freedom Hall has hosted NCAA® Tournament games ten times, including six Final Fours between 1958 and 1969.

Preserve your memories of Louisville Freedom Hall’s contribution to U of L athletics!

This product hasn't received any reviews yet. Be the first to review this product!